Rammy were eliminated from the FA Trophy despite a spirited display in a thrilling eight goal encounter at Sandy Lane that had to be decided by penalties.

This was only the second time the two sides had ever played each other and yet there’s been a combined 17 goals between the two games as Rammy ran out 7-2 winners the first time and on this occasion one less goal was scored in the 90 minutes with a 4-4 score line which led to a penalty shootout and ended 5-4 to the hosts.

The game started how it meant to go on and it only took five minutes for a breakthrough after Jack Greenhough powered a header into the top corner following a floating cross into the area from Connor Smythe giving Worksop an early lead.

Rammy did their best to respond instantly and Sefton Gonzales was unfortunate on two occasions who had a header at goal which was saved by Seb Malkowski and this was followed with a whipped ball in by Daniel O’Brien which found Gonzales in the area but he fired straight at the goalkeeper.

The hosts then made Rams pay for their missed opportunities and doubled their advantage on 13 minutes after a long throw in into the area eventually fell nicely for James Baxendale who hammered the ball home on the volley past debutant Lloyd Allinson to make it 2-0.

On 17 minutes, Chris Willcock’s side were given a lifeline from the penalty spot for a foul om Gonzales by Connor Smythe. However, the resulting penalty from Tom Kennedy struck the post meaning the home side kept their lead intact.

Things got worse for Rammy on 22 minutes as the hosts made it 3-0 thanks to a Gav Allott header from close range giving the Rams a mountain to climb.

Although on this occasion they instantly responded thanks to Domaine Rouse getting there before Malkowski to put the ball home from a Gonzales cross making it 3-1.

Both sides continued to ask questions of the defences but it wasn’t until just before half time that the next goal was scored and it was a second of the afternoon for Domaine Rouse who latched onto a ball over the defence, ran through and dinked it over Malkowski meaning it was 3-2 at half time.

The Rams came out second half looking for that all important equaliser and the comeback was complete just before the hour mark with Gonzales getting in on the action after brushing the defender aside he ran through and made no mistake sliding it beyond Malkowski for 3-3.

Just over 10 minutes later, Rams took the lead for the first time in the game. Following good hold up play from Gonzales, the ball was set up on the edge of the box before being fired in which thanks to a deflection landed at the feet of Mason Fawns who poked home to make it 4-3.

Unbelievably the scoring wasn’t finished there and the home side responded well putting Rammy under lots of pressure which eventually paid off on the 87th minute. The home side saw two efforts hit the crossbar before it fell Scott Brown who fired in an equaliser meaning the game finished 4-4 after 90 minutes and was concluded with a penalty shootout.

Rammy lost out 5-4 on penalties but they gave it everything they had and showed great character to come back from 3-0 down in what was a pulsating game of football. 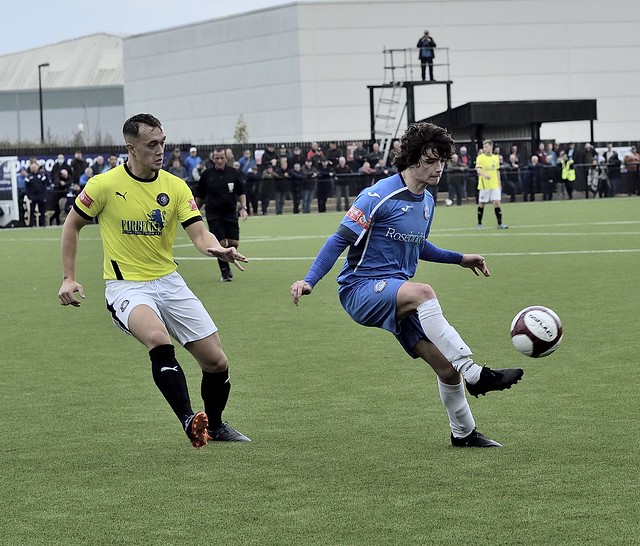 The Ramsbottom United Player of the Month award for January 2017, as voted for by the club's supporters, went…