On the back of a frustrating draw at home when out-played Kendal snatched an undeserved 90th minute equaliser, the Rams travelled up to north Yorkshire determined to make sure they returned back home with all three points, and this they just about managed to do, despite being close to conceding another late leveller.

Missing three integral members of the squad through injury – Jamie Rother, Richie Baker and Luke Thompson – the three points was a reward for a spirited and hard-working performance, and kept the Rams handily placed in second position in the early league table settings.

Both sides exchanged early opportunities, but it was the visitors who opened the scoring in the 21st minute.

Sefton Gonzales, whose height and strength worried the home side throughout the match, saw his shot blocked by the Albion keeper, but as it ricocheted away, Domaine Rouse was on hand to blast the ball into the back of the net from the edge of the penalty area.

Khalil Osi-Efa had the chance to double the advantage but his header from a Tom Kennedy corner missed the mark.

Moments later, after 37 minutes, the hosts levelled things up. A run through the Rams defence ended with the ball at the feet of Bailey Thompson on the right hand side of the area, and he curled it into the bottom of the net to give Albion parity.

The Rams thought they had taken the lead early in the second half, but the goal was ruled out for offside, and within seconds Rams keeper Lloyd Allinson, sprawled on the floor, was called upon to prevent Tadcaster taking the lead.

Substitute Jake Thompson looked dangerous when he replaced O’Brien, with one effort just off target and another from close range smothered by the home keeper, but the winning goal was not far off.

With just over ten minutes to play, Tom Kennedy stroked home a superb right footed shot from just outside the box, which ultimately proved to be the winner.

It did not, however, stop those last minute nerves, as Kennedy earned himself a yellow card as the game went into time added on, but the free-kick from a promising position was dealt with by Allinson, and the curse of the late goals was this time nullified.

A hard-earned three points just about justified as the season continues to roll on, with the hope that this campaign can eventually proceed to it’s normal conclusion, with the Rams, once again  battling away for a promotion spot. 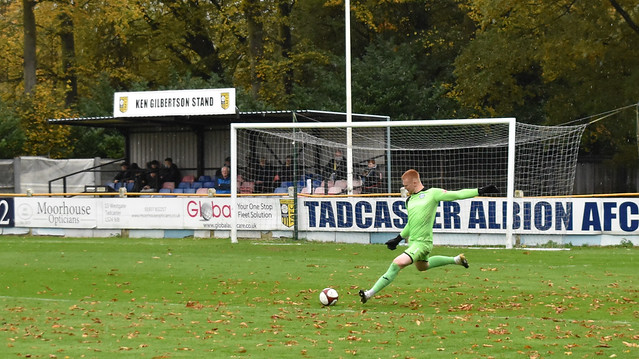 Tonight’s game is OFF!

GAME OFF Tonight's game away at Colne has been postponed due to a waterlogged pitch. A…
Match Reports September 3, 2019