Rams made it back-to-back league wins beating Pickering Town 3-0 thanks to a Sefton Gonzales double and a late strike from Khalil Osi-Efa in what was a dominant display.

The game started fairly evenly as both sides looked to start on the front foot without creating any real clear cut chances.

Jamie Rother had a half chance from distance but it was comfortable for Andrew in goal.

The first real opportunity created in the game ended up in the back of net after a great corner by Tom Kennedy was headed home by Sefton Gonzales giving the Rams a 12th minute lead.

From then on, the Rams didn’t really look back and dominated the rest of the first half.

Rammy threatened with Danny O’Brien unfortunate to see his effort deflected over the bar and Tony Donaldson fired well over.

The visitors first and last sight of goal during the first half came just before the half hour mark but Leon Osborne couldn’t bring the ball down to shoot.

Rammy were unfortunate not to double their lead towards the end of the first half as Jake Thompson struck the bar at the far post before Mason Fawns had the ball in the net but the linesman felt it had got a touch of a Rams player on the way in.

Chris Willcock’s men started the second half where they left off with Donaldson neay making it two but his header went straight Charlie Andrew in goal.

However, it didn’t take long for the Rams to double their lead after a looping ball over the top found Gonzales who cooly rounded Andrew and slotted home his second of the night.

Rams continued on the front foot and Fawns was unfortunate to see his effort from the edge of the area fly just wide of the post.

Despite the Rams dominance, Pickering very nearly found their way back into the game but for a stunning save from Rammy debutant Giosue Bellagambi who’s strong hand denied the visitors after the ball seemed destined for the top corner.

It was then Andrew’s turn at the other end to pull off a fantastic save getting down low to his left to deny Gonzales a hattrick from his towering header.

The Rams made sure of the points on the 83rd minute after a lovely turn and strike on the edge of the area from substitute Khalil Osi-Efa.

Aaron Burns and Mason Fawns nearly made it four but the game ended 3-0 to Ramsbottom and gave them a deserving three points. 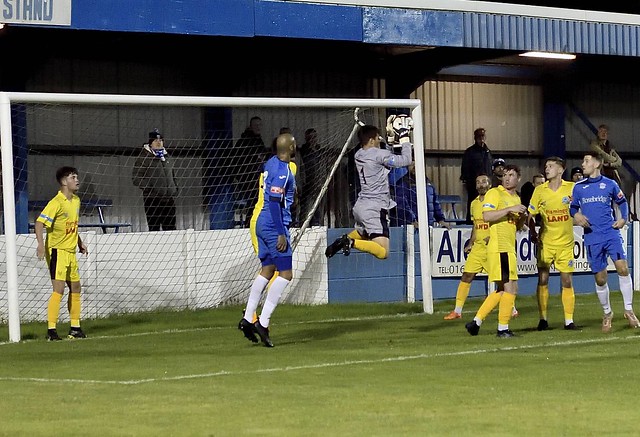 The Rams fine form of late will undergo a thorough examination when Marske United come to town. …