The Rams were unchanged from last week’s win against Pontefract Collieries for the visit of Ossett United.

Ramsbottom were straight out of the blocks for this one, starting with good work down the right from Mason Fawns in the opening minutes he cut the ball inside to Domaine Rouse but Max Dearnley saved well in the Ossett goal.

Rouse was in action again in quick succession. First after a corner from Tom Kennedy dropped to him but his strike was well blocked by the visitors and secondly Rouse got his head on a Danny O’Brien cross but Dearnley did well to tip it over the bar.

Rammy weren’t suffering from a lack of chances they just couldn’t beat the keeper who kept Ossett in it throughout the first half, Sefton Gonzales was also denied his shot was tipped over the bar.

The Rams best chance of the game so far came on 24 minutes after Gonzales had some great hold up play, he played a fantastic ball to O’Brien who raced towards goals, he took his shot but it fell slightly wide.

Ossett United took the lead just minutes later, George Green fed the ball to the goalscorer, Aaron Haswell, he raced forward into the box and smashed the ball home from a tight angle.

Rams boss Chris Willcock was forced into making an early change on 33 minutes as centre back Luke Thompson picked up what looked like an ankle injury. He was replaced by winger Jake Thompson which meant a bit of movement around the pitch, Rouse who was playing well in midfield dropped back into defence, with Mason Fawns covering his role and J Thompson taking the position of Fawns.

Fawns in his new position of central midfield played a great ball out to Thompson, who runs on goal but he saw his shot saved by the legs of Dearnley.

Ramsbottom were level shortly before half time, Dearnley was caught way out of his box to clear the ball, Tony Donaldson won it well in midifeld and chipped the keeper brilliantly from range to equalise for the home side.

The visitors were straight out the blocks in the second half, Jack Normanton went clean through on goal but Dharius Waldron stayed with him to put the striker off and clear the ball.

Rammy also had chances in the opening minutes of the first half, Rouse found Donaldson but the goalscorer was denied after a good challenge by James Burke.

A second chance came minutes later after a great strike from Donaldson from the edge of the area, but it was just over the bar.

Kyle Harrison was booked just before the hour mark for a late challenge on Haswell, Harrison being the second player to be booked for Rammy after O’Brien was in the first half for handball.

Ossett had two chances in as many minutes, first Gio Bellagambi does well to palm the ball away and then Nash Connolly fired over when one on one with the Rams keeper.

Rams made a second sub shortly after the hour mark, Khalil Osi-Efa came on to replace O’Brien, Osi-Efa moved into a more central role and Fawns moved back out to the wing as he was in the first half.

Both sides were looking for a second goal as Ossett keeper Dearnley played a long ball over the top to catch out the Rammy defence. Normanton ran through for the visitors and chipped the ball over Bellagambi but his effort was wide.

Bellagambi was called into action again minutes later, he parried a close range Ossett shot just wide of the post.

Again the Rams keeper was called upon heading into the final stages, he raced out of his goal to head away a cross from Ossett, it falls to the visitors but Rouse managed to clear the danger.

Chris Willcock made his final change on 83 minutes, bringing on Aaron Burns in place of the scorer of the Rams first goal Tony Donaldson.

Osi-Efa had a chance to put Rammy ahead in the final minutes of normal time but his shot from the edge of the area trickled wide.

But that wasn’t the last chance of the afternoon for the substitute, the ball was pinging around the Ossett box in the dying moments of the game and there was Osi-Efa to put the ball into the back of the net, the goal sparked wild celebration from the Rams as the bench was emptied all to celebrate with the scorer.

Khalil’s strike being one of the last touches of the game and gave the Rams all three points against a tough Ossett side, the Rams keep their 100% record in the league this season and sit second in the table behind Dunston.

Speaking post match Rammy manager Chris Willcock said: “To win the game in that fashion is always a massive positive because it shows that we’ve got good character and keep going even though second half we weren’t at our best.”

“First half I was more than happy at half time with the number of chances that we created and if we’d took them really the game wouldn’t have ended the way it was, I think as a spectacle for everybody it was fantastic!”

Next up for the Rams is a trip to Clitheroe who have also started the season well with 3 wins from 5 games so far. 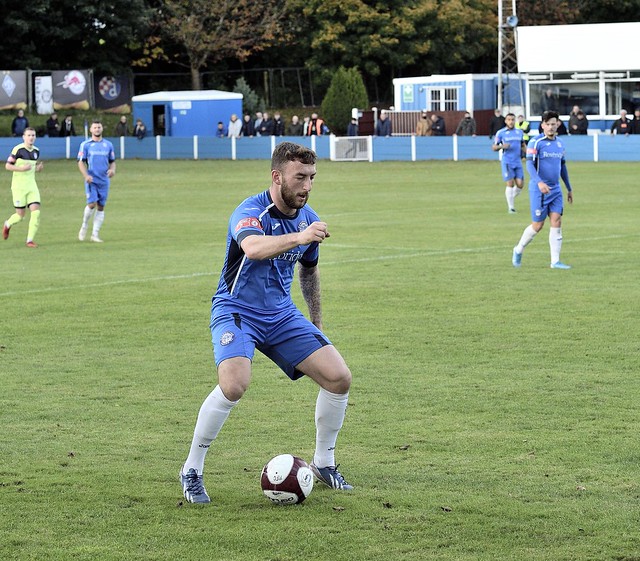 After three trips on the road which have yielded seven points, it’s back to the HWRS as the Rams…

PHOTO GALLERY: TRAINING AHEAD OF CITY OF LIVERPOOL