Football is back! The first competitive match of a new season is always greeted with a sense of keen anticipation. However, given the way the 2019/20 season had ended, it seemed almost remarkable to be a supporter rolling up to-day to the HWRS to watch this particular game of football under what could have been mistaken for nearly normal conditions! Bearing in mind it has been all of six long months since United had taken part in their last competitive match, the memorable 1-0 away win at Marine, before of course the national coronavirus threat had rendered that whole season, technically-speaking: ‘null and void’.

Enough of the history of last season! What was to-day to bring? An FA Cup Preliminary Round encounter against NW Counties Premier League opponents Irlam, a step below United in pyramid status. Initial predictions might have cast United as clear favourites to win on the day.

As the game unfolded though, uncomfortable thoughts started to take hold; not least since the visitors, emerging confidently, had snatched an opening goal inside nine minutes. This came after lone striker Connor Martin, chasing after a lengthy goal-kick, had outmanoeuvred United’s central defenders before coolly lobbing the keeper to put Irlam 1-0 ahead.

While United couldn’t be faulted for the positive way they responded to this initial setback, a growing sense of frustration crept in at the sheer number of chances they managed to create but then squander right up to the half-time whistle. Notable amongst these were two near misses by enterprising new midfielder Domaine Rouse who had succeeded in getting into the right position but then missed two very presentable chances, one with his right foot and the other with a header.

The same could be said for Sefton Gonzales, United’s imposing new 6 ft. 5 striker, who wrought havoc amongst the Irlam defence with his towering presence and physical brand of play but without any of it managing to convert on to the score-sheet. On one occasion, he had the ball in the net but the goal was ruled out for a foul on the keeper. Meanwhile, another close season signing, Danny O’Brien, had shone down the right-hand side of attack, delivering any number of telling crosses which the Irlam defence, living a charmed life, somehow managed to scramble clear.

Then Mason Fawns was straight through on goal but delayed shooting and the ball was diverted for a corner.  Nearer half-time, Luke Thompson’s header bounced down from the underside of the crossbar but not over the line. However hard they tried, things were not going United’s way. Increasingly frustrated by a catalogue of near misses, United trooped off the pitch at the end of the first half looking stunned at the fact they were 1-0 down after all the pressure they had exerted.

Clearly some kind of re-think had to take place during the break! What transpired was a decision to revise tactics for the start of the second half by switching wide men, Danny O’Brien and Jake Thompson.

At first, nothing seemed to have changed though after a quiet ten minutes following resumption of play. In fact, the visitors could well have taken a 2-0 lead after Mwiya Malumo’s stunning volley was only kept out by a wonderfully brave point-blank save by keeper Olly Martin. This then seemed to galvanise the home team into action of their own. From this moment on, a swift and irreversible process kicked in with a sustained onslaught on the visitors’ goal resulting in a tumultuous rush of four goals within the space of just fourteen minutes.

First, following clever interplay between O’Brien and Kennedy, Fawns was left with a straightforward but telling side-footed goal after 55 minutes. Then Rouse, down the right, set Jake Thompson up for a second after 62 minutes. After Rouse himself was tripped in the area, Kennedy then calmly slotted away the resultant penalty after 66 minutes to make it 3-1 before Danny O’Brien stretched it to 4-1 after 69 minutes at the end of a solo run that tore the visitors’ defence in two.

With the match result now unquestionably in the bag, Chris Willcock chose, almost immediately, to substitute both Rammy wingers presumably very happy at what he had seen them produce on the day and no doubt seeking to keep them fresh for the start of the league season next Saturday, an opening away match at Widnes.

It has to be said that it had taken a long time in this match for Rammy to get their act together in the critical business of converting chances into goals. But in that blinding spell of fourteen minutes, they unquestionably showed what they are capable of. In particular, the combination play between Danny O’Brien and skipper Tom Kennedy down the left-hand side during the second half was a strong factor in the turn-around. However, it was a good team-effort all round and, despite the many frustrations of the first 55 minutes, heads never went down. Certainly, there were enough encouraging signs shown to-day for everyone connected to the club to feel confident about how the team is set to fare during the season ahead. 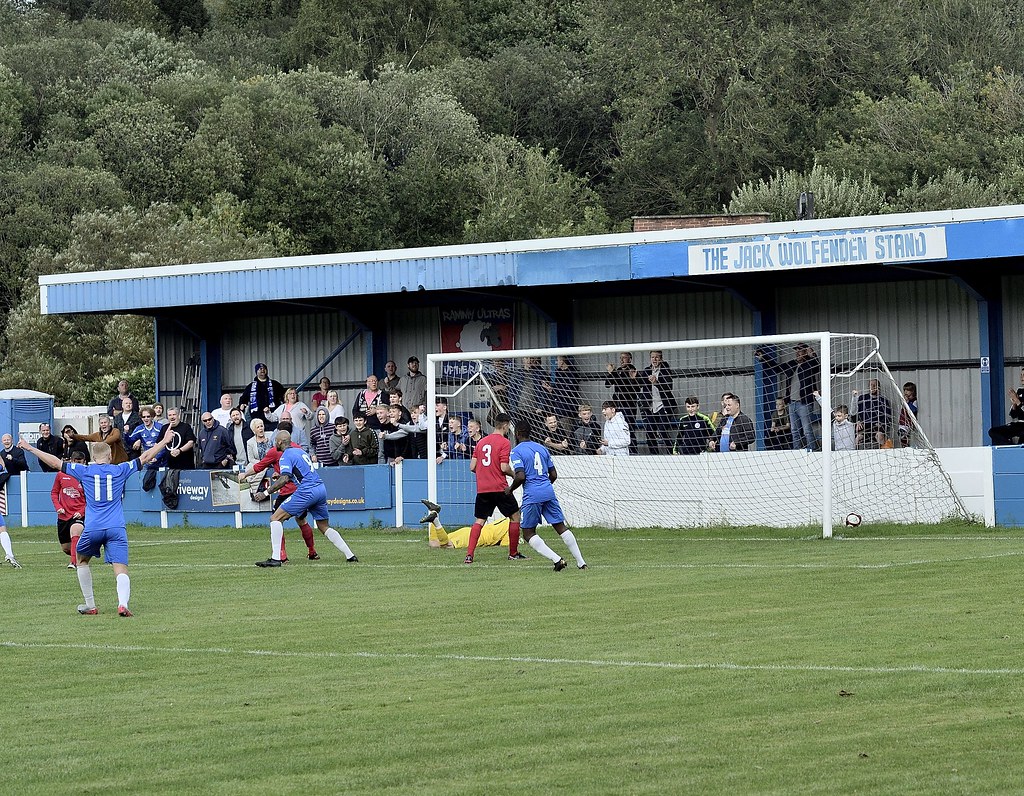 Rams only secure draw at Matlock

Having been in front for the best part of 80 minutes, the Rams will have come away disappointed to…
Club News October 15, 2019

The Rams will now be away at Clitheroe on Saturday 26th October, kick-off is 3pm. …